There are many different toy cameras out there, the most common ones being the Holga, the 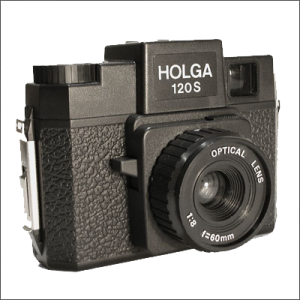 Diana, and the Lomo LC-A.  So why are these cameras referred to as toys?  Well, cameras of this class usually include bodies and inner workings made of plastic, often the lenses are plastic too, giving images from these cameras their unique ethereal charm.  The lenses are fixed focal length, with limited aperture settings and shutter speeds.  The plastic construction of the camera is nowhere near as mechanically reliable as the expensive commercial cameras from makers such as Canon, Nikon, Olympus, Pentax and others.  With the toy cameras, there is a coveted tendency for light leaks and the el-cheapo plastic lenses are obviously not as crisp as expensive glass. These characteristics vary in quality and quantity in each camera, even within units of the same model.
I use mostly Holgas, and enjoy all 4 that I own, each for their individual traits; the light leaks are in different areas and the molded plastic lenses create different vignettes, blurs and lens-flairs.  This is why I find toy cameras to be so much fun; you just never know what you’re going to get.

Let’s quickly discuss some of the differences between the Holga and the Diana.
The Holga has several models to choose from: they have built-in flash, hot shoe adapters or no flash models, modified versions that use 35mm film or standard as 120 film, there are an abundance of accessories you can purchase for your Holga, or a number of modifications you can make to your Holga.  I will get into more detail with all of this in future posts.  The Holga has 2 aperture settings, labled as cloudy or sunny, which are so poor, they usually make little if any difference in exposure; a fixed lens; 4 focusing distances, labled as: individual (3ft), small group (6ft), large group (18ft) or mountains (30ft – infinity); 2 shutter settings, approximately 1/60 sec or bulb; it also comes with 2 film inserts, installed from the back, called masks, that alter the final image size on the film; a 4.5cm x 6cm and a 6cm x 6cm, although I prefer to shoot without the masks as they can decrease the light leaks.

The Diana has 2 versions, the original version (produced from the early 60’s thru the late 70’s) and a

new version the Diana F+ (A re-production that entered the market in 2004).  The versions are basically the same except the newer Diana F+ has a nice pinhole function.  The original Diana shot 4cm x 4cm frames on a roll of 120 film, these cameras can still be found online or at flea markets, thrift stores or garage/estate sales, but because of their popularity, they command a premium price if the seller is aware of what they have.  Like the Holga, the new Diana F+ comes with film mask inserts, a 6cm x 6cm, a 4.5cm x 6cm, and an additional third mask, a 4cm x 4cm.  The Diana has 3 aperture settings, bright sunny, partly cloudy and cloudy, the Diana F+ has all of these plus pinhole; the Diana’s lens is a fixed lens, the Diana F+ has a removeable lens, so you can purchase different lenses and use them interchangeably; it is also possible to purchase a 35mm adapter back for the Diana F+.

I am so excited to share my love of toy cameras with you all.  Please come back and see what’s new.  I will be posting toy camera tips, tricks, holga and diana camera mods.  If there is anything in particular you want me to address add a comment to let me know.  See you soon!